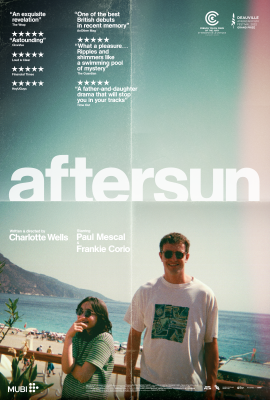 At a fading vacation resort in the late 1990s, 11-year-old Sophie (Frankie Corio) treasures rare time together with her loving and idealistic father, Calum (BAFTA winner Paul Mescal, Normal People). As a world of adolescence creeps into view, beyond her eye Calum struggles under the weight of life outside of fatherhood.

Twenty years later, Sophie's tender recollections of their last holiday become a powerful and heartrending portrait of their relationship, as she tries to reconcile the father she knew with the man she didn't, in Charlotte Wells’ superb and searingly emotional debut film.

Winner of the French Touch Jury Prize at the Cannes 2022 Critics’ Week and the Grand Prize at the Deauville American Film Festival.

This film contains a sequence of flashing lights which might affect customers who are susceptible to photosensitive epilepsy.