The story of Wotton's cinema starts in 1911 when a Mr and Mrs William Coe purchased the de-licensed Crown Inn. Situated on the edge of the Stony Chipping at the end of Market Street opposite the Star Inn, the building was reputed to contain cellars dating back to the Cromwellian period. In 1913 Mr and Mrs Coe opened the Electric Picture House in what was the upstairs Banqueting Room of the old Inn. The venture proved a popular attraction and by 1920 the room was no longer large enough to meet the demand for seats. Old stables were therefore demolished and a new auditorium was constructed. This larger cinema was opened in 1921; it seated 220 customers and the floor was inclined to give a good view of the screen. The seating was made up of mainly plush seats but there were wooden chairs at the front of the theatre for children. These seats were segregated with boys on the left and girls on the right! Tickets were priced at 2d, 3d and 6d. Gloria Swanson and Rudolf Valentino were among the stars who appealed to the audience of the day.

A recent photo of the cinema

The coming of talking pictures necessitated the installation of sound equipment, in 1930. The new technology led to people coming from far and wide to Wotton to experience the “Talkies” - the Thornbury Picture House changed to Talkies later that year with Dursley's Victoria Cinema changing the following year. Plans to construct a balcony to seat a further 100 customers, sadly never came to fruition.

In the 1930s an usherette would come around during the interval with sweets and chocolates on a lighted tray. Also in this decade Rogers Fair would come to the Chipping in March and September and Mrs Coe would go around the fairground ringing a bell to alert people that a film was about to commence. She appears to have been quite a character and would spray the full, smoky auditorium with a fine cloud of disinfectant. If she thought there was too much noise and talking going on, she would stop the film and put up the house lights until it was quiet again. Naughty boys would be ejected from the cinema and refused entry again for several performances. However, when a film broke down, as it often did, the audience would stamp it's feet to show it's frustration, which, as the floor was bare boards, made a considerable noise. 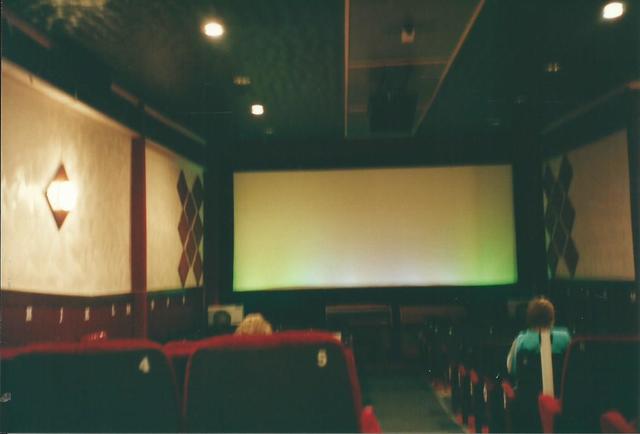 The auditorium in 2001. (Photo by David Simpson, taken from CinemaTreasure.org.)

Between the wars colour films were few and far between and seemed to have been shown on Bank Holidays in particular as a special treat. The equipment needed to show them required more power than for black and white and the screening of colour films caused considerable consternation to the residents of Market street. The cinema's electric generator was not up to the task of powering the equipment so gas was employed instead, using so much of the Town's supply that the lights in the street were dimmed as a result.

During World War II the cinema provided welcome relief from the day to day worries of the conflict. It was well patronised by American troops stationed in the town. In wartime, tickets cost 2s 3d in the back row and 1s 9d at the front  - still on wooden chairs. The war affected the Cinema in one particular respect. The air raid siren was situated in the old Fire Station- the building next door which is now the Heritage Centre. If the siren sounded during a film, the dialogue was completely drowned out. Fortunately the cinema suffered no bomb damage during the war.

The post-war era saw the heyday of the Cinema with films regularly attracting large audiences. In 1947, ownership of the building changed hands after Mr & Mrs Coe put the Cinema up for sale. A retired farmer, Mr C M Jenner bought the Cinema and his daughter and son-in-law, Vera & Reg Grimshaw continued to run it until 1960. By then the increasing popularity of television was beginning to adversely affect audience numbers and the cinema closed it's doors in that year.

Shortly after the sale of the Cinema, a Wotton Film society was formed and Michael Chappell, who had been the projectionist (and undertaken almost every other function in the cinema) was asked if he would become involved, which he did. With his fellow projectionist and friend, Adrian Wicks, Chappell re-opened the cinema in 1963 on a commercial basis for about 18 months. There were five shows a week at an admission charge of 2s 6d. Mr Chappel took the money, Mr Wicks was in charge of the film and their wives were the usherettes dispensing ice cream and peanuts in the interval. After the cinema closed again the Synwell Boxing Club bought the premises and the hall was used for Bingo. 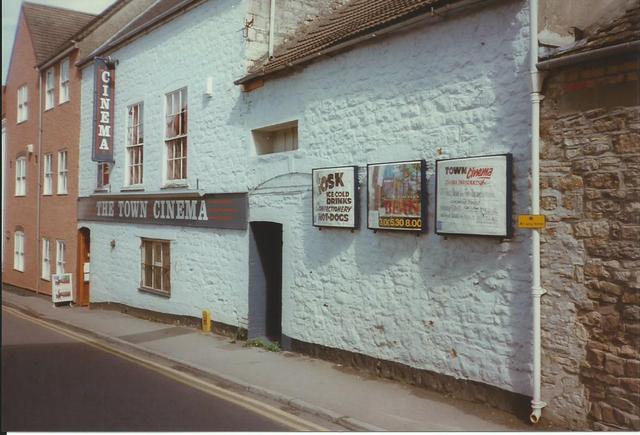 The cinema in 1997. (Photo by David Simpson, taken from CinemaTreasure.org.)

The cinema remained in this form until in 1993, Andy Coudry and Jess Elton saw an opening in the market and re-opened the cinema. During their ownership, the cinema even opened on Christmas Day, possibly a unique event in the UK. With no buyer for the business after 9 years the Cinema closed once again in 2002.

Not wishing to lose the cinema once again, a group of dedicated and optimistic enthusiasts took over the premises and set about renovating and updating. Many rounds of fund-raising, grant applications and obtaining planning position as well as finding sponsors and hard physical labour meant that after three years of hard work, the team achieved their goal of re-opening the facility as a Co-operative Community  cinema. Their efforts were recognised with a number of awards and accolades and on the 12th November 2005, the Cinema once again opened it's doors to the public.  Two years later, the Cinema became one of the first in the country to embrace digital technology with the installation of a new digital projector, enabling it show new releases, and in 2013 installed satellite equipment to show live theatre from London.

By late 2013, a small but significant downfall in ticket sales coupled with the retirement of long-time committee members Jeff and Janet Walshe saw the cinema's future in question again. With the project having reached the limits of what was possible with an entirely volunteer team, commercial operators were invited to take on the cinema.  Gareth Negus and Samantha Osborn took on the challenge, increasing the number of screenings and bringing in paid staff alongside the volunteer team.  The new approach saw an increase in sales, and in April 2015, management of the cinema passed to their new company, The Electric Picture House Cinema Ltd.