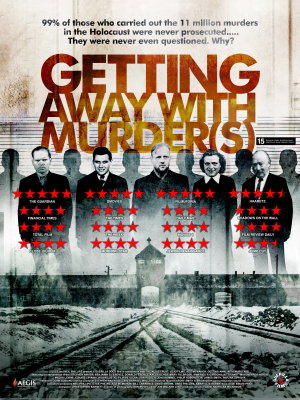 99% of those who carried out the murders in the Holocaust were never prosecuted. Why not?

During the Holocaust almost 1 million people in 22 countries carried out the unprovoked murder of 11 million innocent men, women and children. 99% of those responsible were never prosecuted; most were never even questioned.

The Allies knew what their crime was, and where these people could be found - Germany, Austria, Italy, the UK, the USA, Canada, Australia, and numerous countries in South America. However, after the late 1940s, almost nothing was done.

Director David Wilkinson asks the question - why were so many people actively permitted to get away with their crime(s) - that of mass murder on an industrial scale. Wilkinson’s journey takes him all over the UK, to Ireland, the USA, the killing fields of Lithuania, Latvia and the Czech Republic, to the infamous death camp Auschwitz - Birkenau in Poland, to Austria, France and, of course, Germany.

The film includes an interval, and will be followed by a live Q&A with filmmaker David Wilkinson.