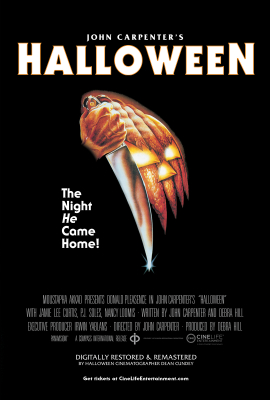 John Carpenter’s seminal 1978 classic returns to cinemas this October, digitally restored and remastered by the film's cinematographer, Dean Cundy. The screening also features a short documentary about the film and its impact, including an interview with the director.

Michael Myers has spent the last 15 years locked away inside a sanitarium under the care of psychiatrist Dr. Sam Loomis. On October 30, 1978, Myers escapes and makes his way home to Haddonfield, turning a night of tricks and treats into something much more sinister for three young women, including Laurie Strode, the star- making role for Jamie Lee Curtis.