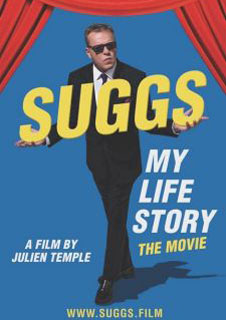 The death of Suggs' beloved cat on his fiftieth birthday triggers a personal quest to discover what happened to the father he never knew. Stunned by what he learns Suggs is taken back through his life to a childhood on the streets of Soho featuring music written by The Kinks, Prince Buster, Ian Drury and, of course, his beloved Madness.

Director Julien Temple (The Great Rock n Roll Swindle, Absolute Beginners) takes a stage show, adds some drama, archive, animation and music, then shakes it all up for MY LIFE STORY where Suggs, takes a hilarious, yet moving, look back at his life in a musical form. Is it a drama? Is it a comedy? Or a music hall dream? Whatever it is hold on to your seats as Suggs goes on to stumble and plummet through the trap door of failure; then trampoline back up to catch the passing trapeze of show business success.

My Life Story - the movie, will be screened across the UK, with a live musical Q & A direct from Koko in Camden Town on 17th January 2018. This red carpet Premiere event will include an exclusive Musical Q & A, hosted by Keith Allen with Julien Temple, Suggs and pianist Deano, beamed live to cinemas via satellite to the silver screens.