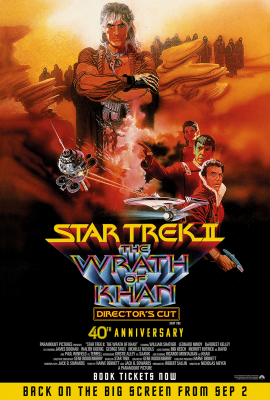 One of the most celebrated and essential chapters in Star Trek lore, back in cinemas for its 40th anniversary.

On routine training manoeuvres, Admiral James T Kirk seems resigned that this may be the last space mission of his career. But an adversary from the past has returned with a vengeance. Aided by his exiled band of genetic supermen, Khan (Ricardo Montalban) - brilliant renegade of 20th century Earth - has raided Space Station Regula One, stolen the top-secret device called Project Genesis, wrested control of another Federation starship, and now schemes to set a most deadly trap for his old enemy Kirk... with the threat of a universal Armageddon.